why would anyone use someone else's name to commit a misdeed?

the nurse used my name to falsely obtain psychotropic drugs, examples of which include pain-killers like morphine & sedatives like valium, from the locked cabinet. apparently he's (yeah, he's a male nurse) been doing it for some months before someone snitched on him.

today, the guys from the pharmacy division of the health ministry came around to conduct its enquiry. because my name was used to perpetrate the theft, i was asked to give a statement which went on for a few pages. and yeah, these guys can't string a sentence in proper english.

but this is not the 1st time i've encountered this problem. psychotropic drugs are widely prescibed in the emergency department as well as in the operation theatres. when i was a trainee in OT at a teaching hospital,  one of the lecturers was found unconscious & frothing at the mouth one evening. it was later found that he had multiple injection marks on his limbs. another trainee with a similar problem was asked to leave the postgrad course.

this is not just a local issue. when i was in UK, a fellow trainee as well as a specialist were found to be drug-dependent. however, instead of being punished, they were sent for counselling 1st, after which, the trainee ended up in general practice while the specialist went into early retirement.

the male nurse has since left the hospital. at the very least, his nursing licence would be revoked. but he is only in his 20s & he is street-smart, which will likely see him thru. after all, he often lamented that he has been left largely to his devices in his growing years while both his parents had been busy working.
Posted by doc at 11:52 PM 10 comments: 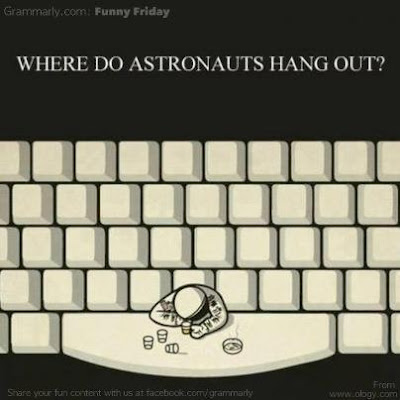 somehow, i thought of lionel ritchie's hit song when i read about the passing of heart-transplant girl tee hui yi. her heart failure had been initially & temporarily managed with a mechanical heart. the battery which operated it looked like a trolley bag which she lugged around with her. she then had a heart transplant in 2007 which failed. she was extremely fortunate to have found another donor heart within 24 hours & the 2nd transplant had kept her alive till yesterday.

technically, she had lived 3 lives & captured the imagination of the nation with her grit & determination to live. she's truly one tough lady!

You're once twice
Three times a lady.

i hope that you will be remembered for your courage & tenacity to beat the odds, more than the pseudo-heroes we were led to worship, like the space traveller, channel swimmers & mountain climbers.

do you know there are courses that teach the general public as well as paramedical & doctors how to help the collapsed man-on-the -street?

the basic life support course is mainly for laymen while those who have attained basic knowledge can sit for the advanced course. the latter is mainly geared towards paramedicals & doctors.

the course content is essentially based on the guidelines provided by the american heart association or european resuscitation council, & may be modified for local requirements. this was not part of medical undergraduate training, so most of us should attend these courses to update ourselves on advances in resuscitation. i said should because it is not compulsory at the moment.

so, i took it upon myself to attend one last weekend. the content of the course has remain largely unchanged since i last participated more than 10 years ago. it was very useful, to me at least, to re-learn the rigmarole of providing critical care.

each of the participants were tested on the theory & practical aspects of resuscitation. on successful completion of the course, a certificate was given. this is not the end, mind you. the certificate rightly is valid for only 5 years, after which one should to be re-tested. again, i mentioned should because this is not compulsory at the moment. 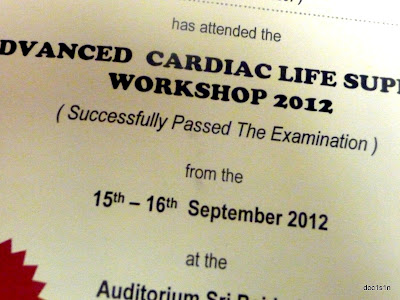 is crime rate really down?

the IGP said it is. the Home Minister agreed.

my taman has been extremely peaceful, ie. no reported break-ins since the 1st residents moved in 12 years ago. but yesterday, 3 happened within a day.

at about 3pm, no one was in when persons unknown broke into a businessman's home, just across the street from where i live.

at midnite, thieves ransacked the home of another businessman behind the street from where i live.

at 6.30am this morning, 6 masked men jumped across the wall into my neighbour's home just 2 doors away. apparently, they had been waiting for the husband to send the kids to school before making their move. they warned the wife they only wanted money & jewelry, otherwise they'll hurt her.

the policeman said this is the 1st time they've been to the same taman 3 three times within 24 hours. as expected, he gave that sheepish look when asked if he thought crime rate was down.

what i learned from these unfortunate events, besides being a lot more careful & aware of the surrounding, is to keep some cash at home to appease any potential intruders. loss of cash trumps personal injury or loss of lives anytime!

i can count the number of gated/guarded communities in this town in 1 hand but that could change soon. i heard vendors of home alarms & CCTVs are doing a roaring business.

the horse has bolted la!

just saw the late news. the PM, while officiating the ground-breaking ceremony of  MAHSA university's new campus, said fewer schools offering high quality medical education would be a far better strategy than having too many offering sub-standard education.

is he admitting that the mushrooming of private medical schools in the country, the licence of which were issued by his govt, thus far had been a bad strategy? too many sub-standard schools producing too many sub-standard doctors, who show neither dedication nor conviction in their line of duty?

too little, too late, don't you think?

now here's a scary thought  - make an appointment with a doctor from hell...... at a hospital near you!
Posted by doc at 1:05 AM 6 comments:

my daughter was called up for the 3rd batch of national service this year. the letter arrived 3 weeks ago. naturally, she would not be able to attend but i'll have to apply for exemption. or rather, in this case, postponement. 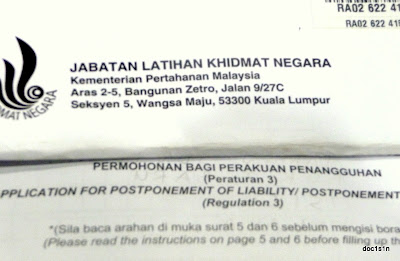 but, if she could go, would i have gladly let her?

not really. going by horror stories of how young healthy youths perished from known & unknown causes during camp, compounded by the lackadaisical attitude of the authorities, unconvincingly assuring that things are under control, i would think many concerned parents would object, if they had a choice.

furthermore, i doubt if the main objective of fostering closer relationship amongst youths of the different communities would be achieved. yeah, a few will become friends but by & large, they will remain segregated because they have been so since primary school. after 11 years in school where each student is made aware of the differences amongst the communities & yet not encouraged to reconcile, how will 3 months in a survival-like course make them bosom buddies?

& after the enforced camaraderie & apparent comradeship is over & everyone goes home, life goes on as before.

on tuesday, the education ministry will announce yet another education blueprint, to move towards the uncharted territory called world-class education.

amongst the elements of this transformation, drawing high calibre graduates to teach & awareness that students are better off being bilingual or trilingual, will be given emphasis. so, i found this statement rather odd.....

shouldn't those english teachers who are found to be low or non-proficient be asked to teach some other subjects, instead of flogging the proverbial dead mule? looks like our kids are going to be subjected to another round of trial-and-error education. solly, I no speak Ingrish.

this reminds me of a blog posting i read recently (read here) where a faulty landing gear of a new MAS plane was not fixed within the 30-day grace period. so far, MAS has not denied this allegation.

isn't this scary? we know what plagues the country, yet the people who can fix this aren't doing it? doesn't this give you the sinking feeling, or in aviation parlance, mayday, mayday?
Posted by doc at 3:52 PM 8 comments:

uprooting oneself to move to another country is a daunting experience for many.

21years ago, on sept 1, i started my new job as a trainee doctor in a small NHS hospital in dover, england. i was thrilled to receive the acceptance letter in late july that year, after having sent out more than 10 applications for a training post. suddenly, there were hordes of things to do before leaving, eg. apply for no-pay leave (which was denied), send out resignation letter, book flight tickets, settle income tax, sell the car, pack the stuff to bring along (mostly notes & books) & discard the rest, and oh yes, spend time with the parents in the hometown. yeah, i remembered my father shed tears as i drove off that day.

it helped that the wife had been to london before. so, it was a breeze to catch the coach from heathrow to victoria station, & then a train to dover in the south coast. the hospital has a accomodation officer who took us to our rented house.

i hit the ground running. no observation or familiarisation period but straight into the job, which was to be the 1st of many. the whole training process had taken me from dover to brighton, sheffield & leeds. i have to admit that i was very impressed with the work culture in the NHS. the service is consultant-based & the trainees are given ample opportunities to learn hands-on, attend courses & time-off for exams.

after 4 years, i'd like to think that i became a better doctor from the experience. i achieved the post-grad degree i had initially set out to attain, made some good friends & colleagues, travelled widely & returned home with an addition to the family - a lovely daughter.

on hindsight, would i have done anything differently?

maybe, i should have stayed back.