the relatives of 2 colleagues of mine died just this week - one from cancer of the lung, the other, of the liver.

another colleague is now undergoing treatment for lymph node cancer.

who's next, i wonder? the waiting is akin to a game of russian roulette. we used to be in the dark concerning the cause of cancer, but now we know better. cigarette smoking, human papilloma, hepatitis B & Ebstein-Barr viruses，& Helicobacter bacterium are all known causes. but what about our lifestyle, the food & water we consume & the air we breathe?

the movies Erin Brockovich & A Civil Action are stark real-life reminders of the health hazard in our environment when we get careless or indifferent. remember Bhopal & Chernobyl? Germany is considering shutting its nuclear power plants in the wake of the Fukushima tragedy & so, you wonder, do we really need a rare earth plant in this country? no wonder the people in kuantan are up in arms at the decision.

a friend sent me an email with an idea you might want to explore further, given the current spiralling of health costs.

how to make birthday parties fun

i've attended a few kiddy birthday parties that were actually fun, but this one's a bit different. 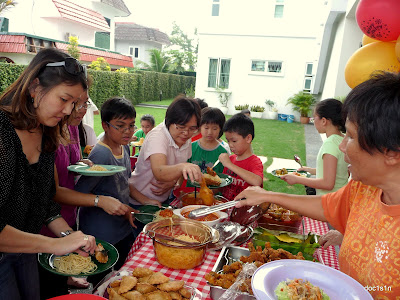 or singing the birthday song around the cake ....... 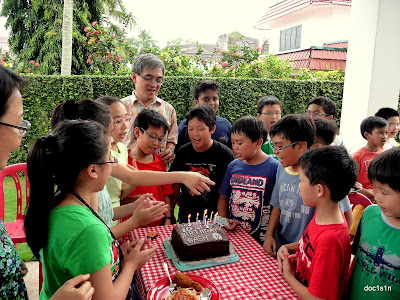 i think the kids love it more when they can interact... 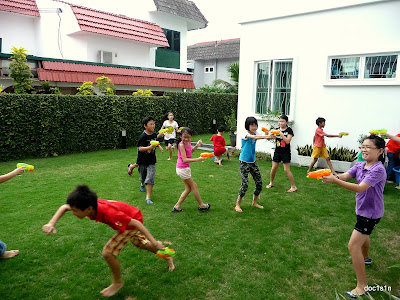 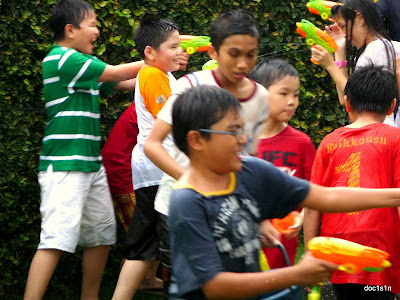 kids with happy faces....isn't that what a birthday party is supposed to be?
Posted by doc at 11:40 PM 3 comments:

A boat is docked in a tiny Mexican fishing village.


A tourist complimented the local fishermen on the quality of their fish and asked how long it took to catch them.


"Not very long." they answered in unison.


"Why didn't you stay out longer and catch more?"


The fishermen explained that their small catches were sufficient to meet their needs and those of their families.


"But what do you do with the rest of your time?"


"We sleep late, fish a little, play with our children, and take siestas with our wives. In the evenings, we go into the village to see our friends, have a few drinks, play the guitar, and sing a few songs.

We have a full life."


"I have an MBA from Harvard and I can help you!  You should start by fishing longer every day. You can then sell the extra fish you catch. With the extra revenue, you can buy a bigger boat."


"With the extra money the larger boat will bring, you can buy a second one and a third one and so on until you have an entire fleet of trawlers.


Instead of selling your fish to a middle man, you can then negotiate directly with the processing plants and maybe even open your own plant.


You can then leave this little village and move to Mexico City , Los Angeles , or even New York City ! From there you can direct your huge new enterprise."


"How long would that take?"


"Afterwards? Well my friend, that's when it gets really interesting," answered the tourist, laughing. "When your business gets really big, you can start buying and selling stocks and make millions!"


"Millions? Really? And after that?" asked the fishermen.


"After that you'll be able to retire, live in a tiny village near the coast, sleep late, play with your children, catch a few fish, take a siesta with your wife and spend your evenings drinking and enjoying your friends."


"With all due respect sir, but that's exactly what we are doing now. So what's the point wasting twenty-five years?" asked the Mexicans.


And the moral of this story is:


Know where you're going in life, you may already be there! Many times in life, money is not everything.

i must be more careful with patients with large noses

who'd thought that a large nose would be a point of contention?

this patient, Mr E, was to undergo a major back operation, which means he has to be positioned face downwards during the surgery.

as standard operating procedure, a soft gel support was placed below his face as cushion. the surgery was successfully completed in over 6 hours. however, 2 days later, Mr E mentioned that his nose was dark red & i explained to him that was because he had been lying face down for over 6 hours, so that was a result of pressure on his nose. it was then that i noticed he had an exceptionally large nose. still, i reassured him that it will get better with time. unfortunately, it became infected after a few more days & antibiotic injection & cream had to be administered. he had gone home since & i hope all will resolve when he comes back for review.

what Mr E has is a typical case of a pressure sore on his nose, the same type bedridden people get on their backs when they lie too long in one particular position. sometimes, even after we've taken the necessary precautions, unexpected events like this still occur.

which is a real damper, especially so since the major back surgery had gone on well.
Posted by doc at 9:39 AM 20 comments:

it was with a little apprehension that i approached the same spot where the accident happened exactly 4 weeks ago. a bit like returning to the scene of the crime & it was fortunate that no one got killed.
this was the 51.7km mark, southbound on the NSE, just after the simpang renggam exit.

i slowed down a bit while taking in the whole scene. there weren't any brake marks on the road to betray what had happened. i also pointed out to the family the spot on the grass verge where i had parked while checking out the passengers in the other vehicles. everything looked normal.

in seconds, we had gone pass. as a reflex action, i looked into the rearview mirror, hoping to see something (or someone) out of the ordinary. there was none.

but i knew in my heart, an angel of mercy had watch over us at that very spot.
Posted by doc at 3:27 PM 4 comments:

sometimes i dread it when i receive sms's like this from my daughter.... 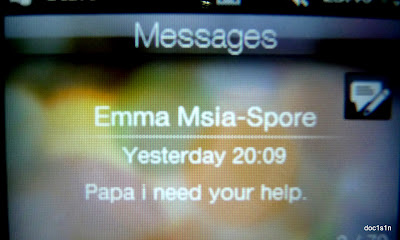 usually, she wants something done immediately.

sometimes i can't do it because i'm tied up at the hospital, in which case i just give some advice over the phone & leave it to her ingenuity or resourcefulness to sort the issue out. which is not a bad thing because she can't be depending on me forever for solutions or answers.

sometimes, i'm at home, so i help her out. but i must appreciate that she still realises that she can depend on me just when she needs me most, esp now that she has flown the nest.
Posted by doc at 12:57 PM 10 comments:

but with the kids at the stadium for the much anticipated friendly game between a malaysian selection & the visiting arsenal football club. 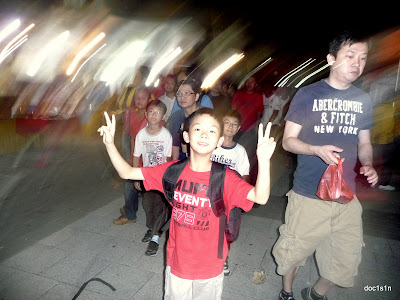 this was our (B8 & i) 1st time watching a game at the national stadium but it was the kids who were more excited. for us, it's an important bonding exercise because we all enjoy watching football on TV & this was certainly one game the kids will remember for a long time to come. 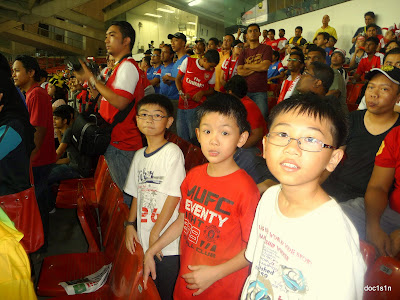 & it's obvious from the colours of the crowd, the majority were there to support the visiting team.

what's not so obvious was how our wives allowed the kids to go for the game. it started promptly at 8.45pm & by the time we got home, it was way past midnite - way past their bedtime & there was school the next day.
Posted by doc at 11:02 PM 8 comments:

where your treasure is.....

i was very attached to my previous car, one i held on for 10 years till it was more sensible (& financially viable!!!) to trade-in than to keep. it was serviced & maintained at the franchise dealer, using only original parts. i even washed & waxed the car myself.

don't blame the wife for calling it my 1st love.

but when i finally decided to trade-in, i elected for something i thought i would not be so attached to - a common japanese car that i could maintain cheaply affordably & service at any workshop, that i could park anywhere without fear of being vandalised & that i would fill in ron95 petrol without 2nd thoughts.

so, when i was involved in an accident recently, i thought i really had gotten over my car-attachment obssession because i really didn't feel any sort of heartache, considering it was just bought last year. seriously. i was just glad everyone in the car was safe & that i could still drive away after the collision.

but when i sent the car to the workshop today, i had a bit of reservation. well, ok, more than a bit. we have all heard of unscrupulous mechanics who pass off inferior parts as original & do slip-shod repairs. when i left the workshop, i've not felt this "loss" since my daughter left for boarding school. like a part of me is gone.

perhaps it's just my personality & not because of the car. i still keep my old handphones, cameras & clothes. i just couldn't let them go, so much so that the wife called me a hoarder. that's true because, frankly, there's just too much junk in the house!!

in biblical terms, my heart would be in the wrong place.


when we wake up, we expect the sun to be shining & breakfast already on the table. when we prepare to go to work, we expect the car to run, traffic to be bearable & the office a temporary sojourn for the next 8 hours or so. while at work, we expect to kids to be at school & when we get home, dinner to be ready.


most times, that happens.


sometimes, things go wrong a bit. we wake up with a flu, the car doesn't start, the traffic is chaotic & the boss at the office is in a foul mood.


sometimes, things go wrong a lot, like lives are cut short. we often think of the young adult who is struck with cancer, or the teenager in a road traffic accident, or a toddler drowned in a bath-tub.


all expectant mothers hope & pray they have a smooth pregnancy. or at worse, just a bad bout of morning sickness. but not this one - 7 months into an otherwise uneventful second pregnancy, she realises one day the baby doesn't kick. a check with the doctor confirms her worst fear - her unborn child has no heart beat.


it's painful. i can see it in her eyes & yet, i also detect a steely resolve. that life has to go on. that there is still time to conceive another child. that all is not lost.


i think this is an exteme version of life cut short - life snuffed out even before the child has the chance to see & breathe the world, not that it's a pretty sight now. i want to console the mother but i can't because as a doctor, i can't explain why this happened, & as a person, i can't comprehend the agony parents go thru when their child's passing predates theirs.