some say it's a sell-out when George Lucas pushed off Lucasfilm, which includes the Star Wars & Indiana Jones franchises, to Disney for USD4b. Disney then announced that Episode VII would be released in 2015.

can america take this and superstorm sandy at the same time??

neither rich nor poor

i presume that's where most of us are in the grand scheme of things, although wealth & poverty are relatively subjective measures.

i'm thinking of the few punters who were reported recently to have hit jackpots of millions of ringgit.

i'm also thinking of a few friends of mine who had made on-the-spot property investment decisions, hitting that narrow window of opportunity, that had paid off handsomely.

the quickest decision i've ever made investing in a property was buying the house i'm currently staying. we went to the developer's office, glanced thru the plans, grimmaced at the price & paid the booking fee, all within 20mins of entering the office. that's only because we've been renting for 2 years & we thought that if we're staying on, we might as well get our own house.

all other investment decisions would take up days of mulling & deliberating. most instances, the circumstances have changed by the time we made a decsion.

a close friend had quit his day job to join genneva as a sales consultant. he had invited me to several of their investment talks, of which i have only attended one. however, i was quite sceptical of their business model because it was multi-level ponzi-like scheme. if i were to take that risk, it was only because of my dear friend's genuine persuasion. it was during this prolonged period of considering & re-considering, & weighing the pros & cons that bank negara raided the company.

that made the decision for me, & arguably for many other potential investors. indeed, time is money but probably not many envisaged money can be lost this way, too.

so, there i remain, right smack in the middle of the grand scheme of things, being neither rich nor poor.

for most of us, that's probably the safest place to be.

But godliness with contentment is great gain. For we brought nothing into the world, and we can take nothing out of it. But if we have food and clothing, we will be content with that. Those who want to get rich fall into temptation and a trap and into many foolish and harmful desires that plunge people into ruin and destruction. For the love of money is a root of all kinds of evil. Some people, eager for money, have wandered from the faith and pierced themselves with many griefs.
1 Tim 6: 6-10
Posted by doc at 4:38 PM 12 comments:

much has been read, written, argued, debated & deliberated on the issue of the infamous sex blog by a couple of  malaysian students in singapore. so much vigour, passion, creativity & free spirit - all  exhibited in a manner that earned outbursts & disdain  from the general public.

nobody knows why they didn't channel their energy positively. doesn't have to be a discovery that changes the world or breaking of a sports record - even something as mundane as swimming across the english channel (pun unintended) would have sort of made the nation proud.

or, like PSY, a singer/songwriter/dancer relatively unknown outside of his native south korea & who wrote a song out of nowhere & choreographed a dance that took the world by storm. admittedly, he may have displaced UN sec-gen ban ki-moon as the south korean with the most world-wide appeal. 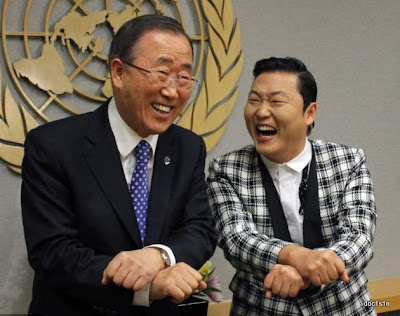 imagine what a malaysian can achive on a UN platform?

the other day, i instructed the nurse at the operation theatre reception counter to get the elderly patient from the surgical ward down to OT & to bring along the relatives. i needed to explain the risks of the procedure to both the patient & his family.

after 45 mins, the patient was still not in OT.

me: nurse, where is the patient from the surgical ward?

me: what's the delay?

nurse: doctor, you said to bring the family along. the family is still on the way from home to the hospital. so, we're waiting for them to come before transferring the patient down.

seriously, i can't fault her as she's following my instruction to the letter. but i would think that if the family is not yet in hospital, surely the patient can be moved to OT 1st while waiting for their arrival. no?

the procedure was delayed by over an hour. the nurse won't be getting the employee of the month award & neither will i be remembered as the doctor with the coolest temperament!

the only consolation was that the risky operation proceeded uneventfully.
Posted by doc at 1:32 PM 12 comments:

it's been brewing for some time now.

no, it's not because the daughter is bringing home 2 singaporean college friends in december. in fact, we're happy to host fellow students who may forge lasting friendships beyond the school years.

no, it's not because one of them is a guy as we're not averse to gender differences.

it's because they've set their own agenda already.

they expect the daughter to drive them around town. that's ok but they want to go drinking & stay out till midnite. they also want to go to KL on a day trip.

i'm not sure what "drinks" are implied here but i'll assume (for now) they meant teh tarik at the mamak stalls. but staying out till midnite is a definite non-starter for a bunch of 18-year-olds on my watch. don't they know this is malaysia, where their former prime minister once declared is notorious for car-jackings & robberies? under my roof, there are ground rules to be followed, whether they (daughter included) like it or not. the friends probably thought this trip is a breakaway from their strict parents, or maybe their parents have been very liberal with them, but i was brought up in a conservative family & i intend to instill these same values in my kids, with some leeway. if it ain't broke, why fix it? when they've finally flown the nest, then how they lead their lives is their own responsibility, although as parents, we never completely let go.

at the end of it all, hope it's just a storm in a teacup.

last nite, as i made my last round in the ICU, one of the nurses asked me if i could help insert an intravenous cannula for a patient who was not under my care. she had tried but failed in several attempts. as i checked on the patient's arms, there were several puncture wounds on both hands, evidence of the many unsuccessful attempts. even the patient looked fed-up & asked if the procedure could be deferred. being in ICU meant one was critically ill & hence an intravenous cannula was indispensable for the administration of essential medication.

after i managed to insert one, the patient asked sheepishly if i was going to charge him a fee for it. i returned an equally sheepish smile.

i know the public is generally wary of doctors in private practice with regards to the perceived exorbitant fees that they charge. i admit there are some black sheep in the profession. indeed, there's even a private hospital in ipoh infamously dubbed the great white shark.

so i wonder if the sheepish smile i gave the patient looked anything like this.... 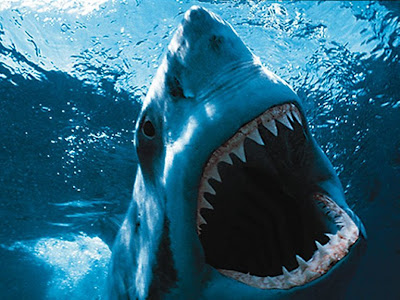 for sales people, anyone could be a potential customer, more so if they think you are a big spender. i know marketing is a tough job & sometimes i sympathise with those sales people outsourced by banks to promote the latter's credit cards. that's why i have ended up with more credit cards than i really need. but i suppose it's a win-win situation - they receive their commission after i sign up & i get the sale gimmick gifts, eg. remote-controlled toy car, thermos flask, umbrella, shoe bag & the list is endless.

last week, i decided to cancel one such card after a year because the govt tax of rm50 was due. so i called up the credit card hotline to express my intention. the guy said i'd get a call from the bank in a few days to confirm the cancellation. in the mean time, i proceeded to cut up the said card & disposed off the mutilated pieces.

yesterday, a lady from the bank called & politely asked the reason for my cancellation.

me : i already have more cards than i need - all out of sympathy for the sales guys at the shopping mall.

she: sir, how about we renew your card free of annual fee & govt tax plus we'll throw in rm50 spending credit?

she : sure, because you're one of our special customers. (i've only spent about rm200 on the card the whole year - ha!)

me : but i'm already a special customer of 3 other banks!

she : it's ok lah, just keep the card at no charge - who knows when you may need it.

me : but my wallet now has more cards than money already!

she : sir, get a bigger wallet lah!

me : but i've actually cut up your card already.

she : no problem, sir, we'll send you a new one next week, again free of charge.

see what i mean - money talks & she must have sniffed blood. when you want a loan from the banks, they'll ask for an arm & a leg as collateral, but when they want you to spend with their credit card, they'll promise you heaven & earth.

that said, i politely turned down the near irresistible proposition & cancelled the call ....before she made the offer impossible to refuse!
Posted by doc at 1:55 AM 6 comments:

people (politicians don't fall into this category!!) generally don't like to be quoted for fear that they may be misinterpreted or misunderstood. when that happens to politicians, they famously stress that they have been quoted out of context.

my blog friend Yan asked me recently if she could quote me in an article she's writing for the borneo post (read here), to which i gleefully  enthusiastically  bashfully agreed.

suddenly, for a brief moment, i felt like a celebrity, being pursued by journalists & hounded by paparazzis, & much sought after for opinions that may change the world. a mover & a shaker, so to speak.

the grass is greener (aka going private)

my friend is a specialist in govt service & will go private next year. i suppose he will feel some trepidation because of the stiff competition he will face. on top of that, there's the premise rental, staff salaries & equipment costs to consider.

still, he is adamant he wants to leave. besides a better pay, he feels he will not get the promotion he wants in the current department. so, it's both push & pull factors.

from my viewpoint, i feel the govt specialists are getting a great deal, as least compared to my time. getting rm15k now is the norm, & more if you do some private work as well. on top of that, you get to go for upgrading courses & meetings, plus annual/conference/study/compassionate/paternal/maternity leave. for obvious reasons, the women specialists tend to remain in govt service.

isn't it true the grass always seemed to look greener on the other side?

But godliness with contentment is great gain. For we brought nothing into the world, and we can take nothing out of it. 1Tim 6:6,7

doctors shouldn't bet, because by nature, we're supposed to be averse to taking risks, whether calculated or not.

i was on-call the other day when my obstetric colleague asked me to do a procedure on his patient. he said he'd bet that the patient would scream her head off during the procedure; otherwise, he'll buy me a beer, not that i'm the drinking type.

to his & my surprise, she didn't even let out a whimper.

so today, after a hard day at the hospital, i'm having beer after dinner. 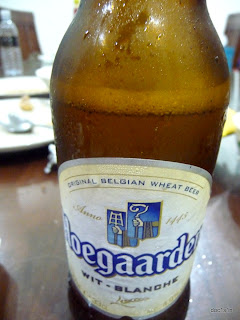 & someone else wants a piece of the action as well! 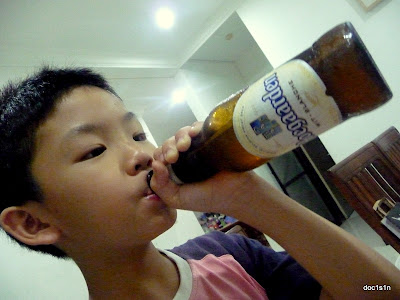