grass on the other side

couples living together without getting married is as common in the west as fish & chips. cohabiting is also not a totally new concept in malaysia, either. the reasons they give include saving on house rent, sharing the washing machine & spending as much time as possible together. some see this arrangement as a prequel to the main event (marriage) - a trial of sorts to determine if living together permanently is a viable option. a bit like trying on clothes before the purchase to see if the material feels comfortable or if it's tight at the crouch.

sometimes the trial period is too brief to discover if the other person lives like a pig, & sometimes no amount of trial will uncover the bad habits & shortcomings.

years ago when a close friend K needed a change of jobs, i asked him which of the 2 possible options he's lined up was his preferred choice. i remembered his saying that it would be a dream move to have YC as a colleague. YC is a pioneer at another medical centre & his exemplary reputation had preceeded him. obviously K was thrilled to death when YC personally vouched for him & invited K to join in a partnership (marriage of convenience??).

the "honeymoon" lasted only 1 week before disgruntled feelings & displeasure emerged, mostly YC's. it wasn't long before K realised YC was hard to please. it seemed YC relished being in charge of things - a "control freak", in K's own words. he wants things done a particular way, usually to his own advantage, & naturally would not budge from his stand. K , being the junior partner, put up with it for a whole year - he filled in for YC when the latter was unavailable to fulfill his responsibilities, did stuff which YC distanced himself from & at the same time, sacrificed his own free time to carry out those additional duties - before things came to a boil.

K decided enough was enough & "filed for divorce", one that was almost as acrimonious as michael douglas & katheleen turner's in the movie "war of the roses". except that nobody got killed here. however, accusations were hurled, mostly by YC, & tempers flared, mainly YC's.
they went on separate ways & it was years later before they got back on speaking terms. however, one can still feel the simmering heat in the background.

so, is the grass greener on the other side? there are single men & women who think marriages are made in heaven while some married couples swear that marriage is an institution from hell. K thought YC was the perfect partner until the ugly side reared its head. i received an sms some time back which cheekily declared that getting married is like going to a restaurant - you order what you like, then wished you had what the other guy is having.

my own simplistic 2sen worth of opinion is that marriage is an act of faith, a journey of hope & a commitment of love. no period of cohabitation will make it work - if hope, faith & love can't get the job done, nothing will! didn't paul the beatle sing that love is all you need? even better is to heed the advice of paul the apostle :

"do not be yoked together with unbelievers. for what do righteousness & wickedness have in common? or what fellowship can light have with darkness?" 2 cor 6:14
Posted by doc at 11:58 PM 8 comments:

my daughter should be posting this blog. but she isn't. yesterday's the last day of school for the year & in her case, last day in primary school. i asked her if she'd like to have my camera (& i even offered her new batteries) to capture in digital print moments commemorating a passage of rites with her classmates/teachers she may want to keep for posterity, but she politely turned me down. hey, what gives???

my parents never owned a camera & i got my 1st only in med school. looking back, i now despair at the numerous precious memories that now only reside in the dark recesses of my mind. if i had a camera when i was 12, imagine the stories, illuminated with photos, i could have come up with!

i have a faint recollection of my last days in primary school but i still remember some of the teachers vividly. mrs thumboo comes to mind 1st, followed by puan rahmah & mr brockett. puan rahmah was the primary 1 class teacher & i was her "pet". she liked me so much, she even asked me, on more than one occasion, if i would be interested in one of her daughters. up to this day, i still do not know if she was teasing. 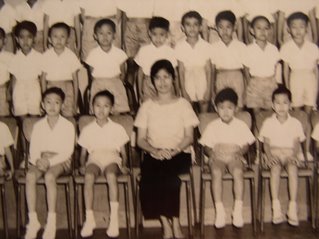 mr brockette is eurasian (my 1st encounter with someone so big & fair-complexioned) & primary 4 class teacher, schooled in british tradition in hong kong & a true blue disciplinarian - he could very well had been the headmaster, except that the latter was even more fierce than him!! 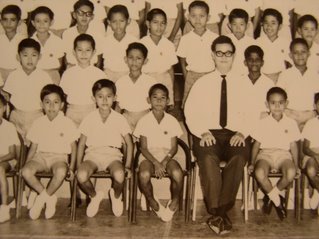 there were also a few trainee teachers who, despite their brief sojourn, endeared themselves to my classmates & i. mr nathan came in at primary 4 - he was a really likeable chap & we tried to help him as much as we could. i remembered his appeal - that during his assessment, when he asked questions, as many of us as possible should put up our hands, whether we knew the answers or not. but we felt sorry for him because he failed in his stint with us. mr boh ooi chek, a batu pahat boy, was with us in primary 6. he was truly "one of us" & i really missed him when he left. i wonder what he's up to these days - should be enjoying retirement by now.

but what i do remember clearly of the good old days is that school holidays is for.....er.....holidaying, be it a few weeks with the grandparents, hanging out with friends/relatives, going on a vacation with the family. or even just "lepak" around at home. but none of that sedentary stuff for our modern super-competitive parents/students. as i write this, i know for sure plans are afoot for day classes, night classes, tuition classes, extra classes, motivation classes, memory improvement classes - any thing that will make sure the students stay ahead of the competition.

to be, or not to be.immortal words. the only bard i could quote, since literature was not offered as a subject in my school. no matter, because i managed to pick up some eg. goodnight, goodnight, parting is such sweet sorrow, & some i learned the hard way eg. hell hath no fury like a woman scorned.

mr C has AAA. nope, that's not his credit rating & he's neither a member of the automobile association nor alcoholic anonymous. he has an Abdominal Aortic Aneurysm - an abnormal bulge in the main artery in the abdomen from a weakness of the vessel wall. it has grown to a diameter of over 5cm & needed to be repaired before it leaks or worse, ruptures - then all hell will truly break lose!

earlier, he had seen the urologist for difficulty in passing urine - typical of a prostate problem for someone his age. it was during a routine abdominal ultrasound examination that it was fortuitously discovered he also had AAA. the vascular surgeon was called in & as this was the more urgent problem, mr C agreed to have the aneurysm repaired 1st. as part of a pre-operative assessment for major surgery, he underwent a gamut of tests. the chest xray revealed that he has a suspicious-looking 3 cm nodule in his lung. unfortunately, the subsequent CT scan showed that this nodule, very likely cancerous, is too deep-seated to be removed without excising the whole lung as well.

it looked like it was not going to be for mr C. he thought he only had a urinary disorder - the prostate surgery could be done in an hour & he'd be out of hospital in 2 days. then we found he also has AAA - the aortic repair could be done in 4 hours, he'd be in ICU for 2 days
& then discharged from hospital within a week. but this lung tumour is a different ballgame & adds a sinister dimension to the scenario. should he have the AAA repair & then to discover that he has incurable lung cancer? or maybe, proceed with lung surgery & then have the aneurysm rupture on him? shakespeare aptly described this scene, also in hamlet :

when sorrows come,
they come not single spies,
but in battalions.the logical way out of mr C's predicament is 1st, to biopsy the lung nodule, determine it's nature & assess if it's amenable to chemothearapy or radiotherapy. then decide the sequence of treatment option for the best survival. not an easy resolution. mr C has but a short time to confer with his family & we await his decision.

i face instances like this all the time, & it only serves to remind me of my own mortality. in my pursuit of dreams & ambitions, i often take for granted the many little things in life whose worth far exceed any worldly rewards. what price do we put on the power of sight, the ability to laugh & the unfailing love of our family? when do we decide that we should be contented with gifts our ungrateful selves have been bestowed upon but don't deserve? shakespeare may not have the answer but the wise men of yore did shed a clue :