i was at the wake service of my colleague's father-in-law last nite. at 76, he had been leading an active life till the heart attack took its toll on him.

one of his friends who stood up to speak of him, said he was very surprised that for the 6 years he had known the deceased, it was only recently that he found out the latter's son-in-law is a heart specialist. in other words, he had lived on his own identity, & not by whom he knew or was related to.

that impressed me a lot. how often these days do people like to boast of whom they know & who their friends/relatives are, just to gain a bit of recognition? i suppose you get that a lot in corporate dealings when agreements/contracts needed to be inked asap.

even some of the wives of my colleagues have forsaken given up their surnames & introduce themselves as mrs so-and-so. in the west, a married women is expected to take her husband's name, & some still keep them even after divorce, eg. ivanka trump, bianca jagger. however, i doubt if we are ready to relinquish our asian values at the current moment. furthermore, is there any place or a valid reason for a change in our identity cards, driving licences, passports, EPF, or income tax forms?

anyway, i speak for  myself & all these years, the wife is still known by her maiden name.
Posted by doc at 12:51 PM 9 comments:

Our gold medallist at London Olympic Games stands to become an instant millionaire.

that's a story in The Star yesterday (read here). call me old-fashioned, which i am, but we always talk about the good old days when representing the country in the world's sporting arena was an honour & winning was the one desire in every sportsperson's dream. the prize money, though pittance those days, wasn't much to brag about.

remember the football team of arumugam, santokh singh, soh chin aun & mokhtar dahari? we were consistently the best in south-east asia & second only to south korea in asia. look where we are now despite turning professional?

in badminton, we have no clear chance of winning the thomas cup since 1992, when the razif brothers last brought glory to the country. now only lee chong wei has consistently won at international level while the koo-tan pair (in 2007) & roslin (in 2003) proved to be a flash in the pan at the all-england. unfortunately, squash is not yet an olympic event.

maybe money has nothing to do with our title drought but it sure can be a distraction.

on an unrelated matter, if you support electoral reforms, wear yellow tommorow.

it could well be the new gold.

truth is not only about facts or reality. it's also what the majority of people agree on.*

like centuries ago, people believed the sun revolved around the earth, or that the earth was flat. they had no scientific proof then, so they just believed because that's good enough for them.

it's just down to perception.

i remember this conversation from the mini-series the kennedys. john f kennedy was worried about how the public would respond to their campaigning for presidency. his father reassured him : it's all about perception & with the right amount of money, we can make people think what we want them to. and as we all know, the younger kennedy was duly elected.

so, perception seems to create a more powerful impact than the truth. perhaps, there's actually no such thing as twisting the truth. just project the image you want people to see you as, & to them, that's the truth.

politics is such a crafty art.

*from the musical wicked

love of my life 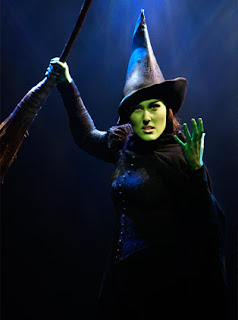 my daughter has been asking me to watch the musical wicked with her ever since it started last year. the show will end its run on apr 22, so since i'm free this weekend, i told her to get the tickets. she called while queueing for the tickets :

she : papa, the cheapest tickets are all sold out.

me: how much are the next category of tickets?

she : it's so expensive! are you sure?

in a way, i couldn't quite believe i said those words but it's my strong belief, though simplistic, that children brought up in an environment of love, be it propagated by thoughts, words or actions, generally will grow up to give love as well. that said, i must confess that neither of my parents ever said words to that effect to me, although they did show it by their actions of caring for the family. not quite the same, is it?

anyway, i thought 95 bucks is not exactly an arm or a leg, but the time spent doing the same things she likes would eventually prove priceless.
Posted by doc at 4:30 PM 18 comments:

when i was still in primary school, my 4-yr-old neighbour stuffed some green peas into her nose. her concerned parents 1st took her to a nearby barber shop. it must be out of desperation because up till now, i can't figure out why they brought her there, but those barbers manning the shop flatly refused to do anything because the girl was struggling & that wasn't helpful. in the end, they took her to a clinic. don't know what the GP did to calm her down - probably didn't but just asked her parents to restrain her while he successfully removed the offending peas.

fast-forward 4 decades & kids haven't changed much in their propensity to stick things into their noses. this girl, also 4-yr-old, started producing blackish secretions thru one nostril associated with pain. her parents brought her to hospital & she was under general anaesthesia to find out the cause of her nasal discharge. this was retrieved..... 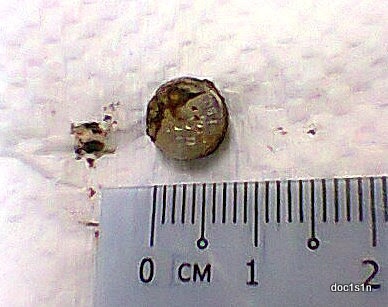 it's a miniature battery, either from an autogate or car alarm remote. the difference between this & a pea, is that small currents flow when the battery come in contact with the moist tissue in the nostril, causing miniature burns. it's been in the nose for 2 weeks & that would explain the black-coloured secretions. it also caused a perforation of one of the inner walls of the nasal cavity.

i imagined, had that been a more powerful battery, would there be smoke coming out of the nose??

another item to add to the "most expensive" list. read here and here
Posted by doc at 1:30 AM 15 comments:

my son just changed piano teachers. his 1st teacher, Grace, which i think is a lovely name, passed away after a long illness 2 years back. he's been with this 2nd teacher since, & we did notice over the years that he's neither been too enthusiastic about the homework nor practising at home. he used to play on his own initiative but now, we even have to coerce to get him to the keyboard.

then, we realised to our horror, that this teacher only teaches for 30mins on the piano, then gives out written exercises for the remaining 30mins, during which time, she teaches another student on the piano!

i beginning to wonder if this is the norm amongst music teachers?

now, the new teacher, coincidentally also named Grace, which makes me think that life has gone a full circle, assured us the boy will have her undivided attention for the whole hour. when we paid for the lessons, in advance as is the practice adopted by all music teachers we know, she issued a receipt.

we were surprised, mentioning to her that all the previous teachers just recorded payment in a notebook. she said she pays tax on her income & she's ok with that. she also quoted this from the bible :

"Tell us then, what is your opinion? Is it right to pay the imperial tax to Caesar or not?” the Jews asked.
Then Jesus said to them, “So give back to Caesar what is Caesar’s, and to God what is God’s.”
matt 22:17, 21

oh, did i forget to mention that her father is a practising pastor?
Posted by doc at 11:34 AM 7 comments:

as medicine seems to be the perennial flavour-of-the-month amongst young, impressionable school-leavers, it was indeed a refreshing change that someone else intends to pursue a different career path....

smart boy - not for him are those long hours & late nites his father spends at the hospital. still, it's early days yet & he could change his mind later. after all, i had wanted to be a bus conductor before. 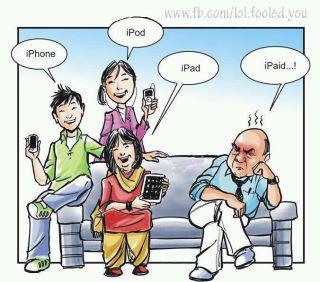