many letters from govt departments end with these words. it means that the writer is just following instructions "from above," even though that person may well be the head of the dept. i thought it rather odd - if everyone is following instructions, can no one do things differently, or must it be strict compliance to "the instructions" from whoever who issued them?

i was interrupted in my sleep early this morning by the nurse from ICU, informing that my patient's breathing was laboured & the oxygen  content in his blood was very low. having rushed to hospital in double quick time, i was dismayed that the nurse had administered to him only 2 lit of oxygen per minute all that time, a miserly amount given his dire condition. she defended herself by stating that was the flow rate the previous doctor had ordered.

naturally, i snapped at her & criticised her for not using her discretion. 2 lit/min of oxygen is fine for most patients who are not critically ill, but when they develop breathing difficulties that result in low oxygen content in the blood, the oxygen flow needed to be increased. the level of treatment must be appropriate for the condition of the patient - is that too difficult a concept to grasp???

anyway, everything turned out ok for the patient. i left the ICU with the sinking feeling that the public sector's "saya yang mengikut perintah" culture has already pervaded private medical care.

some years ago, a friend brought me to Yoke Heng restaurant in seri kembangan for the unique claypot loh shi fun. 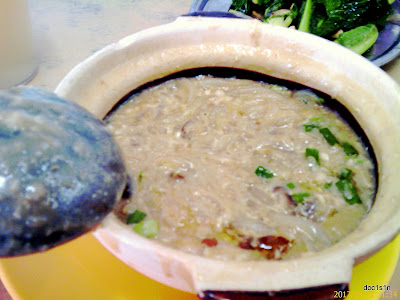 made a day trip into KL yesterday & i decided to try to find it by GPS. it was actually listed under the dining section. it's that famous also because on the wall of the shop are media clippings of famous personalities who have feasted there, although i couldn't recognise any of them. the guy who took our orders also recommended the deep-fried taufu & seafood noodles. 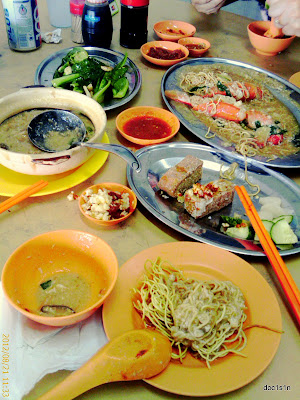 did you see that HUGE prawn with the noodles? have a closer look here.... 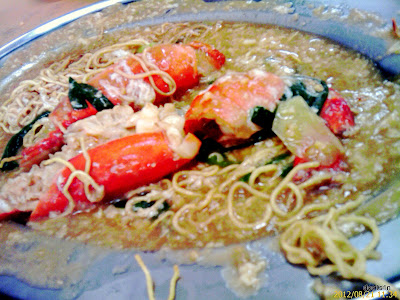 yeah, this dish caused a HUGE dent on the wallet as well!

do all doctors in private practice drive big cars?

not necessarily true, but the parking attendant at the hospital seemed to think so.

being a holiday yesterday, i drove the wife's little proton & parked randomly in one of my colleague's lot. when i returned to the car park several hours later, one of the wheels had been clamped.

so there, that's one myth busted - now you know of at least one doctor who drives a little proton.

on the same note, not all doctors in private practice are mercenaries, either, but that's a post for another day. 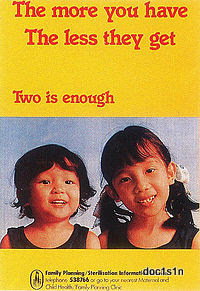 i remember in the 60s, the singapore government actively promoted their "stop at 2" & "2 is enough" policy on TV. this was in reference to limiting the number of children to 2 for each family, one reason being that the small land mass of the island may not be able to support a fast growing population.

fast forward half a century & as a result of that policy, they find themselves short of skilled labour & professionals, resulting in the rapid influx & immigration of foreign workers, much to the angst of the local residents.

in an interview some years back, lee kuan yew, the ex-PM who enforced that policy, confessed that he had made a mistake & in a turn-around, encouraged couples to have 3 children or more, if they could afford it. now, with the low fertility rate threatening to change the demographic profile of singapore, his national day message was headlined as this:

it was a mistake, he admitted, & the government is trying to reverse the trend. at least, he was being honest.

now, can we expect our government to confess its mistakes, take responsibility & then try to correct them?
Posted by doc at 11:45 PM 16 comments:

i'm as patriotic as the next guy & i do so want lee chong wei to win malaysia's 1st ever gold medal at the olympics but......

there's just too many unnecessary distractions to that cause, the biggest being the immense financial rewards promised for the feat. this includes the prize money, pension for life, a block of solid gold (valued at rm2.5m) & probably a host of others offered by his sponsors.

now, the PM's wife is making a special trip to london just to lend support for the realisation of the malaysian dream.

i have no doubt chong wei is one of malaysia's true sportmen whose professionalism & commitment to the game is beyond doubt, but he is human & all these pressure will play on his mind.

i have reservations but i hope he proves me wrong.

i hope he plays for the gold medal, not the bullion.

in any case, he's a national hero already, being the only sportsman to win medals in consecutive olympics.

(our doubles pair has consistently disappointed us, this time by faltering in the semi-finals)
Posted by doc at 5:58 PM 6 comments: