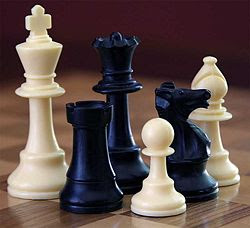 for his exploits in , Malaysian shuttler Lee Chong Wei was handed a mock cheque for RM300,000 by the deputy Prime Minister, no less, at a dinner last night in , the former’s home state. He was also promised a RM 3,000 monthly pension. 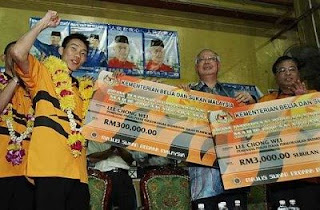 all fine and dandy, considering this is ’s only second silver medal in Olympic history. however, i feel it was unfortunate that at the same event, the Barisan Nasional candidate for the upcoming Permatang Pauh by-election was also present and he spoke at length, & in two Chinese dialects at that, of his aspirations for the constituency.

so, was the dinner to celebrate Chong Wei's success? or, was it part of a political agenda? it’s been often said that sports and politics should not mix, but it’s obvious from past and current events how well the two complement each other.

the Penang Chief Minister called it "manipulation" (read here). & i fear Chong Wei, despite his commendable feat, has been reduced to just a pawn in a game of political chess.

I don't think it's something to be proud of. It can be filled w/conspiracies too - the pension and the prize for winning the silver medal; etcetera. It's more like a bribe for the athletes than a source of motivation.

gone are the days when athletes proudly pursued victory for the country. somewhere along, money come into the picture & it's all hazy now.

Look back into the history... how many athletes whom got the money and perform better and get more gold or win more games... errrr... i don't know :-p

Anyway, this is not the 1st time our lovely bolehland government missed use our fund (I meant using the military plane in the by-election campaign)... when are they going to learn their lesson... *Sigh*

p/s. you can always skip that part lah.

the only one currently is Nicole David. everyone else seemed to have fallen into mediocrity after winning something.

i think it's called "one-hit wonders".

all these excesses by the govt is borne by tax-payers' money - & what did Mahathir himself say about majority of tax-payers??!!

On a different note,

My fiance, Alvin played badminton with Chong Wei at a school level competition before in Penang, and he beat Chong Wei straight out! But well, that was more than 10 years ago when they were in Primary School.
Well, sad to say, my fiance didn't persus Sports as a career though, haha, went on to Engineering.

at least your fiance get to boast that he once played with an Olympic silver medallist, & i bet he gets lots of autographed stuff from CW.

Yes, badminton is great exercise, unless you have bad knees like mine!!

Nah, he doesn't get lotsa autographed stuff from CW unfortunately, but I'm sure Alvin could if he wants to, they're both friends still.

Oh dear, U must be very active in your teens, U don't have OA now, do U? My dad had to get a total hip replacement at the age of 52 but it was mainly due to his weight & fair enough, he was very active in sports during his earlier years :P

Have any of you tried Wii Fit? It's great!! It actually helps your BMI if you religiously do the exercises recommended!

i was active in sports in my teens as i was told that exercise would make one taller. that's a known fact but it didn't work for me - i was hoping to be a 6-footer! no, don't have OA yet but trying to delay its onset by not being too vigorous on the joints.

no, actually never heard of Wii Fit but will google it. thanks for the tip.